DWU
Founded in 2000, Domestic Workers United [DWU] is an organization of Caribbean, Latina and African nannies, housekeepers, and elderly caregivers in New York, organizing for power, respect, fair labor standards and to help build a movement to end exploitation and oppression for all. DWU is a proud founding member of the National Domestic Workers Alliance. DWU and its partners brought their power to bear in 2010 when the nation's first Domestic Workers Bill of Rights was passed in New York.

How to Right a Historic Wrong: Domestic Workers and Employers Come Together in the First “Kitchen Table Dialogues” 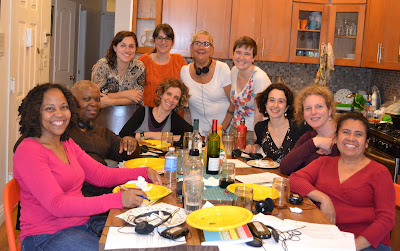 On November 11, 2012, together with Jennifer Barnard, Allison Julien Thompson, and Sylvia Medina, I participated in the first “Kitchen Table Dialogues,” a meeting between domestic workers and employers to discuss shared values and our aspirations to raise standards in the domestic work industry. Given an almost century of institutional neglect, these first dialogues between workers and employers marked a significant milestone for our movement. Our fight to reverse institutional exclusions engendered by the National Standards Act was realized with the passage of The Domestic Workers' Bill of Rights, historic legislation that provided a foundation for an industry which previously had none. Our fight to bring dignity and respect to the work that truly makes all other work possible did not, however, end with this victory. The Bill of Rights provided us with the minimum protections available to most workers in other industries. Beginning the work of raising standards beyond mere minimum protections necessitates that we gain the support of employers who share our dream that all work will one day be valued equally. Excluded from the National Relations Act, domestic workers, unlike most other workers, do not have the right to collectively bargain. Gaining the support of employers who stand with us in our fight to bring dignity and respect to this workforce has been deeply emotional and humbling experience. In these first dialogues, Jennifer, Allison, Sylvia, and I were able to articulate directly to employers the ways in which our work often extends beyond the purviews of workers in other spheres of employment. Domestic workers often develop deep attachments to their families that employ them, loving the children for whom they care. Each of us articulated this commonality by putting in writing the following statements at this first meeting:

Jennifer: "I see my role, my job as one that extends love towards those I care for. I really love to care for kids."
Allison: "Other people's kids become my kids. My role is to make sure kids grow up happy."
Sylvia: "Children must be raised with a lot of love. I give them a lot of love. I love children; I love my job."

Like Jennifer, Allison, and Sylvia, in the two decades I cared for children, I learned that my role as caregiver is a vital one, in which I became not only a key cog in the works that kept the family running smoothly, but also had both the responsibility and reward of nurturing and supporting children that became an important part in my own life. This first meeting highlighted the ways in which we, the workers, perceive our jobs as more than jobs; in reality, domestic workers become both teachers and co-parents. As caregivers, we share with our employers the value of high quality care for children. These first Kitchen Table Dialogues opened the door to discussing our shared values, and how these can evolve into goals that can be accomplished by all parties jointly. The unity of domestic workers, working hand in hand with employers is a chance to right a wrong; domestic work is important work—domestic work is real work. 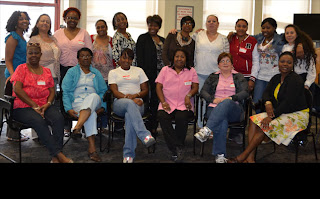 Domestic workers often engage in daily activities, such as running personal errands for their employers, scheduling appointments for family members, and preparing meals for their employers and their employers’ guests, yet are often not able to formally incorporate these responsibilities into their work contacts and agreements. In September, DWU members participated in our Household Management 101 course, and learned how to market their managerial skills, as well as cultivate new ones to help better market themselves as professionals. DWU Household Management 101 and 102 teaches domestic workers the real-life skills needed to secure better employment. Members learned: • Personal presentation: How to look and speak like a professional • How to improve their interviewing techniques • Cultivate interpersonal and communication skills needed to negotiate for higher wages and better work conditions • Learn how to write an excellent resume • Know their rights as employees! 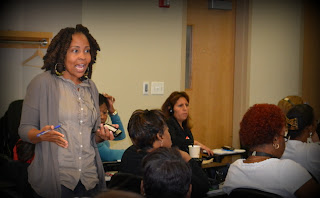 DWU member Ann Marie explains the ways DWU’s professional trainings have been vital to her own personal growth: “DWU trainings teach us our worth as workers, and that if we’re not happy with our current jobs, we can have something better. They give us the skills, the knowledge, and the certification that enables us to be able to go to an interview and say, ‘look, these are my credentials,’ just as you would in any other industry. I can now negotiate fully for what I think I’m worth.” At DWU we are passionate about empowering workers to stand up for their rights, as well as providing courses that can cultivate the confidence and skills needed to professionalize and bring positive change.
Posted by DWU at 6:38 PM No comments: 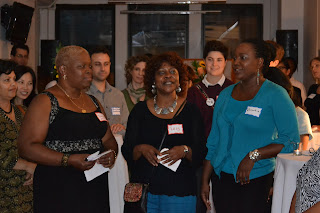 On September 20, we were thrilled to celebrate DWU’s new home with our allies, donors, members, and friends at DWU’s fundraiser office warming party. The contributions made, big and small, are vital to our success. The support of our community ensures we have the resources necessary to build people power, and advocate for the rights of domestic workers – whose work makes all other work possible! That night guests saw our office outfitted for a fabulous affair and heard from board members, staff, employers, and children cared for by domestic workers talk about why implementing the Domestic Workers’ Bill of Rights and continuing the work of raising standards is vital to this industry. DWU sends a heartfelt “thank you” for all who joined us to celebrate our new office. It was wonderful to see everyone’s smiling faces and to join together in good spirit! 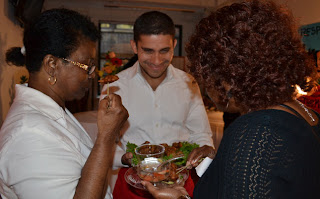 To watch a testimonial by DWU Board Member and Ambassador Jennifer Barnard, click here. To watch Donna Schneiderman speak out about the importance of implementing the Bill of Rights, click here. To listen to Abby speak out in support of her nanny and all invisible workers, click here. Lastly, to learn about the next phase of our work, a shared vision between workers and employers for a Code of Care, click here!
Posted by DWU at 6:31 PM No comments:

"It's been an honor to have you all here," said Pat today to the loyal supporters who attended her trial for a fourth day. We hope to finally see justice for Pat when the trial resumes Monday morning at 9:30am.
Posted by DWU at 10:47 PM No comments: 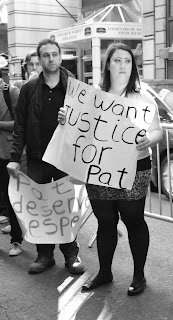 The courtroom was full today with more than 50 supporters from Jews for Racial and Economic Justice, Adhikaar, Damayan Migrant Workers Association and the National Alliance all taking the day off from their jobs to support Pat. "There are so many people here and across the country praying for Pat" said Joycelyn Gill-Campbell. "I am here because one day I could be in Pat's shoes. These types of abuses happen very often to domestic workers, but most are afraid to complain," said DWU member Lizet Palencia. DWU Board member Vilma Rosen also expressed her solidarity: "I am here today primarily to show my loyalty towards Pat and, second, because I believe in the dignity of all domestic workers. I'm supporting Pat during this hard time and I know she would do the same for me." Pat was so happy to receive a card signed by the members of Damayan, and pictures of the ladies from La Colectiva de Mujeres wearing purple yesterday in California to express their support during morning recess. The trial continues tomorrow 500 Pearl Street. To attend contact Joyce@domesticworkersunited.org
Posted by DWU at 11:07 PM No comments: 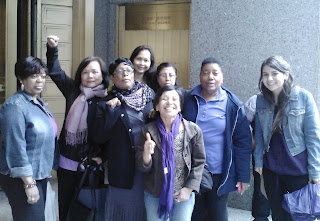 DWU member Pat Francois showed tremendous courage yesterday when she told her story of being verbally and physically assaulted by her former employer before a jury in federal court. Over 40 domestic workers and allies attended the first day of the trial wearing purple, Pat's favorite color. Acknowledging their support Pat stated "all the supporters in the room are boosting my morale. They are my strength." Friends and allies spent a second day at 500 Pearl Street on Tuesday June 5, with domestic workers from Damayan, Adhikaar, the NDWA and DWU filling the courtroom. "We are here to be with Pat and to show our support for justice, and for the dignity of all domestic workers everywhere. We are part of a family, and we come together to support each other," said Linda from Damayan. Having familiar faces in the courtroom is increasing Pat's confidence after almost two full days of testimony. As she explained, "having all these women here makes me feel stronger, and feel like I can fight back." The trial continues tomorrow morning at 9am. Join us and show you support Pat!
Posted by DWU at 10:49 PM No comments:

Today is an historic day, because all of the organizing among workers and allies to bring dignity and respect to care work has paid off. The White House and the Department of Labor have announced proposed rules to extend overtime pay and minimum wage protections to home care workers. Long excluded from the Fair Labor Standards Act of 1974, home care workers may finally get the rights that they deserve for the important work they do. The Department of Labor will now be taking comments on the proposed regulatory changes for 60 days. Individuals and families who will benefit from these changes must come forward and tell their stories. We call on all domestic workers, consumers, and anyone who has a loved one who needs in home care to join us in urging the Department of Labor to narrow the companionship exemption.
Posted by DWU at 7:28 PM No comments:

The provisions of the Domestic Workers Bill of Rights seek to address the historic exclusion and discrimination against people working as nannies, housekeepers and elderly caregivers in private homes. The provisions of the new domestic workers legislation are:
*establishes 8 hours as a legal day's work
*overtime at the rate of 1.5 of the regular rate of pay after 40 hours for live-out domestic workers and 44 for live-in domestic workers.
*one day of rest in each calendar week (should try to coincide with a worker's day of worship)
*overtime pay if a worker agrees to work on her day of rest
*After one year of employment, entitled to 3 paid days off
*Protection against workplace discrimination based on race, gender, sexual orientation, national origin, disability, marital status and domestic violence victim status.
*Protection against sexual harassment by employer
*Protection against harassment based on gender, race, national origin and religion
*Covers full-time and part-time domestic workers for workers compensation insurance.

DOL Study:
*By 11/1/10, the Department of Labor issues report to the Governor, the Assembly Speaker and the Temporary President of the Senate on the feasibility and practicality of domestic workers organizing for the purpose of collective bargaining.

To learn more about the historic Bill of Rights, CLICK HERE and visit our Know Your Rights website.